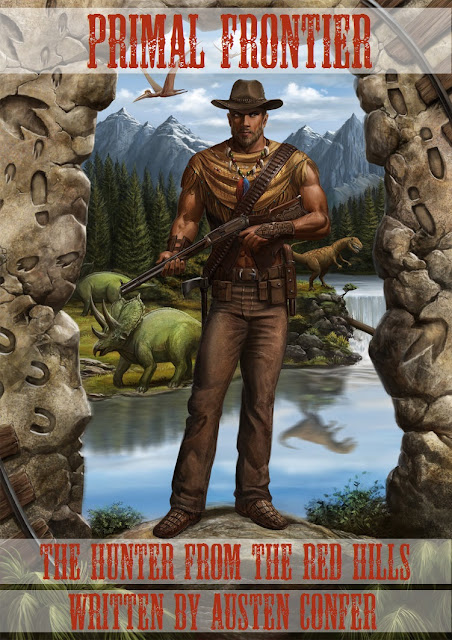 Alright ladies and gentlemen, behold the upcoming series! Primal Frontier!
This is the brainchild that I've been gestating for almost three years now and finally getting rolling.

Primal Frontier is a Weird West alternate history setting in the 1860's and 1870's on a massive continent that is populated by all sorts of exotic creatures from our past, the most prominent being dinosaurs. It is a primitive and savage land, bristling with dangerous animals and hostile natives. This land of mystery and peril has been only scarcely explored. But brave men and women will venture into the unknown and encounter all manner of adventures.

Magna Terra is a monster continent occupying the space that North and South America used to take up, and even with all of the dangers that are present, the allure of adventure or starting a new life brings all sorts of people from the lands of Europe and Asia to explore its depths.

Enterprising hunters glide through the woods for dangerous prey in a deadly game of cat and mouse. Prospectors probe the hills and mountains for precious gold and opals. Miners dig into the earth for iron and copper. Railroads begin snaking across the countryside with their puffing locomotives. Bounty hunters and lawmen try to find deadly criminals. Militia try to fend off hostile tribals who thirst for blood. Daring sailors and river boatmen brave the murky waters that are alive with fierce water beasts and pirates. There are criminals hoping to escape organized law in the scattered lands while governments vie for control and expansion.

This series will have everything from men fighting man-eating dinosaurs to train robberies, miners fighting off bandits to sea reptiles attacking pirates, natives riding domesticated dinosaurs to archeologists discovering lost civilizations. Folks, I've thrown everything but the kitchen sink into building up this world and I hope it will be as immersive as I find it to be.

For the moment the stories will be in the form of short stories or novellas very much like the Robert E. Howard stories. Short but dense and fast paced. This will also allow me to write stories quickly, keep them compact and do a lot of them over a great many adventures.
I've got a handful of characters lined up already, and each will have their escapades with their own goals and tones.

My very first story, which will be uploaded onto the Amazon Kindle system, will be free so that everyone can get a feel for the world, my primary character and the style. Future stories will be in anthologies, although I am not yet sure just how many stories of what length will go into each anthology. Let me know what you think would be good in the comments!

For the dinosaur nuts, I've done a crap load of research so that the animals will be fairly accurate, but I've found that it will be impossible to get them down 100% due to the fact that paleontology is always changing as new discoveries are made. With that said I hope you won't flip your lid if I get some physical features incorrect or if some species behaviors seem out of place. I've actually worked to create an organic environment where wildlife realistically interacts with the things around them, so in order to streamline the setting I've had to cheat here and there. This isn't to imply that I haven't done research and I'm lazy, heavens no! I've actually spent a few pretty pennies to get access to excellent sources so that I could get some of the best information possible given my limited resources.

The premise of alternate history gives me a bit of leeway in the regard of animals of different continents and epochs interacting, which I know is a huge pet peeve of paleontologists both professional and for fun. For this setting, just try to use Dinotopia logic.
Also don't go ape if the characters get things wrong either. In this period of time paleontology didn't really exist in any organized form, and most of the people who come to this continent are unscientific rubes who will fall back on more primitive ideas to explain the dinosaur stuff. I know darned well they aren't reptiles, but that's how guys back then would describe them.

If you're a gun nut, you will love some of the stuff in here. Being a hopeless addict of firearms from that era and having read reams of information about 1800's guns from European muzzle-loading elephant guns to American frontier lever action rifles you'll find yourself looking at things both familiar and different, but all accurate to the period. Those of you who haven't read about the transitions from black powder to smokeless powder or muzzle loaders to cartridges will have little care, but those who do will see parallels or interesting divergences from firearm evolution that we know. Finally, all that reading is going to pay off! :D

There will even be different cultures already on Magna Terra consisting mostly of primitive tribes with various religious beliefs and behaviors. And don't worry, they won't all be nameless, faceless savages who attack everything on sight. Their behavior towards visitors will depend on many things, just like in real life. Heck, a few of them will end up being main characters! I'm hoping that they will come across as believable and understandable.

I've even put a good chunk of effort into economics and political interactions. But don't worry, you are under little threat of being bored by mundane political analysis in this series. It is only a means to sow the seeds of adventure for our heroes. Political strife and economic strain make for good adventure prompts. ;)

All in all, this is a detailed world I've developed and will continue to flesh out as the series continues across many stories. We'll explore lost civilizations, fight fierce beasts, meet strange peoples, fight in great battles and almost anything else you could want.

Primal Frontier is now published and up! Please take a look, buy and leave a review, and most of all enjoy! :)
Here is the first installment and introductory story, Hunter from the Red Hills
http://www.amazon.com/Primal-Frontier-Hunter-Red-Hills-ebook/dp/B00TE416RO/ref=sr_1_1?ie=UTF8&qid=1452932204&sr=8-1&keywords=primal+frontier
Here is another, Stalkers in the Storm
http://www.amazon.com/Primal-Frontier-Stalkers-Austen-Confer-ebook/dp/B00Z549X6I/ref=sr_1_2?ie=UTF8&qid=1452932204&sr=8-2&keywords=primal+frontier
Posted by Eccentric Cowboy at 9:54 AM