Well then, yet another game has thrown its hat into the survival ring. Surprisingly this one is set in the Conan mythos. I'm a huge fan of Ark: Survival Evolved and the Conan stories written by Robert E. Howard, so when I heard about this my curiosity was piqued. It's an early access game, so obviously it has problems, but if they can be addressed and ironed out then it should be solid. The art design is gorgeous, and things look like they have a lot of atmosphere, which is very appreciated. And there's a story here as well! Precious rare for survival games.

Look at these screenshots. The design is absolutely gorgeous and it feels very livable. What's more, you can actually explore and investigate ancient ruins! I'm a total sucker for ruin raiding. And the Conan mythos is stuffed to the brim with delicious lore. If these developers have actually read the books and integrate that into the story and ruins, this might very well be an epic game well worthy of your time. Heck, right now I feel like I'm looking at Stygia. I would LOVE to visit Stygia and view their serpent god or fight with their dusky priests. Or plunge into the moldering depths of the Pictish wilderness, fighting bloodstained Picts waving axes and swords. Or see the jungles of Khaiti. Or the infamous icy hills of Cimmeria! The potential here is extraordinary, and I find myself salivating at the idea of a Conan game that truly implements the lore and sets you loose upon the world.


As of yet I haven't bought it, but I certainly plan to investigate further. I might do a follow up if I purchase it. We shall see!
Posted by Eccentric Cowboy at 2:24 PM 2 comments:

Humanity has never been short on imagination with mythical creatures. From things such as the Greek chimera to the European werewolf we have so many strange made up critters on this earth that they could make up an entire phylum by themselves. But while most mythical creatures around the world are done with class and firmly established themselves in the world consciousness, North America has apparently created the most bizarre and least dignified figures of critter folklore imaginable. I'm not talking about Sasquatch or Caddy. Nope! They command respect and intrigue.

What I'm referring to are the likely opium and whiskey-addled tales of old time loggers known as "fearsome critters." I have to hand it to those fellows, they had an imagination I wish I had. The creatures they thought up are so unusual, illogical and strange that one has to wonder what was in the drinking water there at the time. Take for example, the so-called Splinter Cat. Ever wonder where all those snapped branches and broken tree bases come from? You might suppose its the natural work of gravity and the elements. How silly! No, it is actually the work of this cat with a wedge-shaped nose with the strength of granite that rams itself into trees with admirable gusto for reasons kept safely secret in its punch-drunk skull.

Or the Rubberado, a mole-like creature with a wonderfully rubbery hide which if eaten, gives the man rubbery skin that can withstand bullets. That one might be my personal favorite. Sure would have come in handy with the lead storms that cropped up now and again on the frontier!

Another fascinating one is the canteen fish which supposedly haunted my neck of the woods when I was in my larval stage. They must've been drank into extinction, cuz I could never find one despite all my searching and reproaching looks from my family members. That might have done something to do with my prescription dosages now that I think about it.

There's plenty more which make you question your sanity, but I find them delightfully strange. If your life is too normal and you want your daily dose of weird, take a peek at the following link where you will be treated to some good descriptions and illustrations of North Americas mythical critters. Although for the international audience, you will soon realize why we tend to stick to glorifying Greek creatures. >:D

Folks, book addicts like me and thrift stores just don't mix well. I mean, they do, but only in the same way that a heroin addict and a drug dealer do. Technically both are getting what they want, until the addict runs out of cash and he still needs a fix. Thankfully for the most part I've been able to keep myself strong whilst sorting through various books and things that come through.

But what should happen today on my shift when I help someone out? An entire cardboard box filled with classically written volumes on the multiple facets of the American West. Sixteen books in total, each around 200 pages long, filled with delightful historical pictures and facts with a lyrical prose that makes it feel like a joy to read instead of a chore. Biting my lip to keep from salivating I flicked through the pages, my pulse pounding as I poured over what I realized were veritable treasure troves of knowledge which had heretofore eluded me. Issues which I had seen only barely glossed over in magazines or online articles were beautifully fleshed out here, going on in a level of depth that tickled me to my core.

But alas, I hath not the money to afford them! Even though they are dirt cheap and I can get a discount, I don't have the funds to get even three of them. Such is the curse of fools such as I! Doomed to see such miracles of history and literature dance before me and raise their metaphorical skirts at me, knowing that I cannot partake! What sin have I committed to see such gems slip from my fingers at this time? Also worth mentioning is that they are within that amazing realm of books printed in the 70's, making them new enough that copyrights still apply, but old enough that nobody sells them anymore.

Maybe I'll get lucky and nobody will pay any attention to them until I get my next paycheck. I haven't felt this desperate for many moons. I'm even considering borrowing money, something I haven't done in almost a decade. Pray for me dear friends! I'll either sell a few teeth for a few quick bucks or spend the next few nights weeping into my pillow.
Posted by Eccentric Cowboy at 9:46 PM No comments:

Look at that title. Look. At. It. If you don't want to rush off to read anything with the title Dino-Pirates of Ninja Island, you have something fundamentally wrong with you. Man, I know that the world is kinda messed up right now, but it is genuinely hard for me to feel too bad when I see stuff like this floating around. Check this. https://dino-pirates.com/

I seem to have a kindred spirit here! I've only read a few of the stories, but this gent has some legit talent and makes me want to learn more. Seriously dude, publish something on Amazon so I can throw my money at you!

Anyway, the setup is pretty self explanatory. There are a series of islands inhabited by dinosaurs and being traveled by pirates and various Asiatic cultures. Right off the bat I'm most interested in Two Lions, and no, it's not just because they are attractive women. It's cuz they are hard core warriors on a mission in an awesome setting and get stuff done! The artwork for them is excellent too. Just from their expressions alone you can understand their characters perfectly. 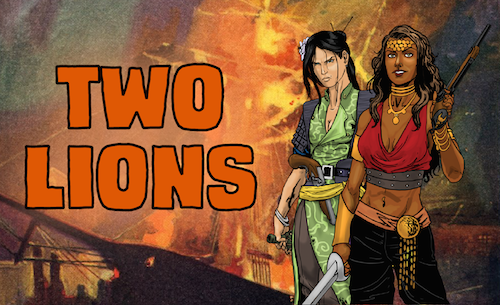 Jihanna is clearly a gal born for adventure and doesn't need much else. So being a pirate is right up her alley. All she needs is a firm blade in hand and an enemy to stick it in. She enjoys her work of combat and rapine. Subtlety isn't her thing. She's an up front spitfire and attacks like a wildfire. What's not to like?
Siu-Wai is much more subdued and finesse-oriented. She's brains and dexterity, attacking cleverly and analyzing what needs to be done. Together they make an awesome team!

In fact, I'd wager Jihanna would be right at home among the likes of Conan, Neal Fargo and other pulpy action characters.

It's not just stories either. This guy appears to have a setup to run tabletop games with rules and even an island designer. (Happy sigh) Folks. It's at times like this where I'm glad the internet exists. How else would an eccentric starved of adventure and seized with wanderlust come across stuff like this? Seriously, it's like this guy and I are on the exact same wavelength, but we're from alternate realities and ended up doing very similarly themed and designed ideas with some variations.

I sincerely hope that this setting continues to get expanded and gathers more fans. It deserves it. Good sailing lads!
Posted by Eccentric Cowboy at 12:25 PM No comments: